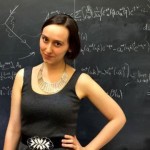 After graduating from the prestigious MIT, Sabrina Gonzalez Pasterski, 22, is pursuing a Ph.D. at Harvard and has uncountable job offers, including one from Amazon founder Jeff Bezos and NASA, and when attending a school where a large number of students are considered brilliant, she stands out as “the next Einstein.”

The ‘new Einstein’ stands out among the increasing number of young physicists in the United States  – which increased from 3,178 in 1999 to 7,329 in 2013, according to the Institute of Physics of the United States and has received hundreds of thousands of dollars from various organizations and companies to finance her research.

I highly recommend to take a look into her website PhysicsGirl.com which contains interesting papers of physics and math.