Skip to content
CalaShip 1.0 is the first prototype of marine drone realized by the Calabrothers Corporation. The vehicle was designed to be an hybrid RC/autonomous fishing drone.

The project started in December 2010. The hull was entirely realized by the group and was available since late January 2011. It is a fiberglass hull with wood carpentry incorporated. The bottom part of the hull was integrated in February 2011 with a handmade shaped wooden keel, after that the hull was finalized with sprayed gelcoat. 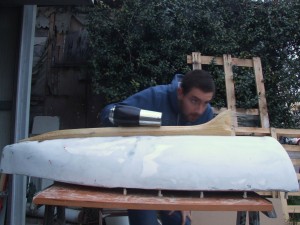 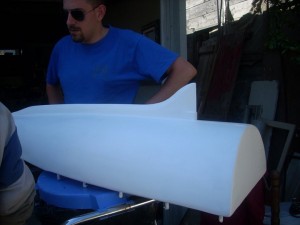 The electronic board was based on Arduino and was integrated with several sensors and dc-dc converter.
Electronics current configuration:
* PC104 AMD 500 Mhz with Ubuntu 12.04 and MOOS
* Arduino Customized Board:
* GPS
* 3Axis Accelerometer
* 3Axis Gyroscope
* 3Axis Magnetometer Drone first trial was in August 2011 in Salina. First sea trial was a success. A first attempt to use the CalaShip 1.0 as fishing drone was obtained by using fishing line connected through floats. Unfortunately, no fish were catched that time.
During winter 2011 project continued by means of new modules attached to the drone. Two Kevlar side hulls was designed and connected to the main hull by mean of shock absorbers, transforming the original vehicle into a multi-configuration trimaran. This modification of the vehicle was realized to support the expected high roll moment derived by the fishing rod, the shock absorbers connection of the side hulls with respect to the main hull of the drone was realized in order to minimize the course angle deviation carried out by the fishing line force. With this vehicle configuration in fact the main hull can still roll partially and the roll energy will be partially dissipated by dampers. In order to reduce the drone weight lead-acid battery has been replaced with a lithium-ion battery and a aft deck was made using composite material (polypropylene, polymethylmethacrylate, glass fiber and Kevlar) that can be mounted when the drone is not used for fishing purposes. 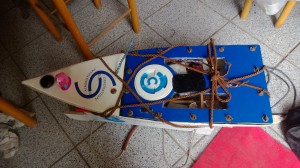 The second edition of the CalaShip 1.0 includes:
* Trimaran module
* Fishing rod and fishing reel RC-driven by dc motor.
* Viper FF1 fishfinder echo sounder with remote interface
* barbie polena
* Turnigy Nano-tech Li-Po Battery 12V/6Ahr
* Composite materials aft deck for non fishing purposes
* Light bulb for night fishing sessions
The fishing season started with a very small sample of Occhiata, a typical fish from Aeolian Islands. The estimated cost of this fish was around 0.8K€/hg and it was immediately released but… One shot, one kill. After several adjustments, the drone was ready to catch fishes… Salina Island remember the August 2012 as the CalaShip1 Nightly Massacre of the Occhiate. During the tests in summer 2012 we discover that the transmission Graupner Schottel II is extremely fragile and it is the main weakness of the drone. Several problems were also encountered during sea trial in Easter 2013 were the transmission fails permanently. Currently we are working on a new metal z-drive to substitute the broken transmission.

We use cookies to ensure that we give you the best experience on our website. If you continue to use this site we will assume that you are happy with it.OkNo